Exact one week after the dreadful R089 release, read my post about it, R090 is released.  To be honest, I like a few things of R090 very much.

ELO system
One of the things I noticed was :


"PvP matchmaking is now based on an ELO system"

This could be very well THE solution to balanced PvP matching. You can read more about the ELO rating system on the wiki page.  In short, the system works as follows.  You gain points by defeating opponents and loose points by being defeated.  After a while players can be ranked according to their points.

The beauty of this system for PvP matchmaking in Drakensang Online is that this ranking is not influenced by experience nor fame tree level.  Only the capabilities in the arena are brought into the equation.  So it is well possible that a player of level 34 plays better then a level 38 player although his fame and experience tree is probably lower.  By this system the level 34 player will indeed rank higher than the level 38 one.

To me it looks promising.  Let's see how it works out in real life.

New level gems
Bigpoint is adding a new level of gems, the sacred gemstones.  I was wondering if anyone want to buy this because they are so expensive for the little you gain with it.

edit :
I just found this image on the drakensang latinoamerica facebookpage ...  you must be kiddin' me ... 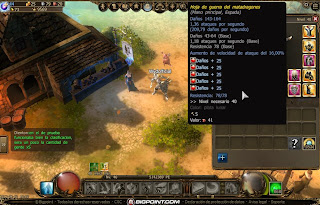 The news of the days came late this evening in this post on the English forum.  And I quote :

We, the Game Designers of Drakensang Online, have decided that we want to come closer to you. Let you know what we're doing, what our intentions and plans are and what we will be working on in the future.

For this purpose we talked to Community Management and decided to open up this channel of direct communication with you, the player.

Please feel free to check this channel frequently. We will not adhere to a strict posting schedule (we do have a game to develop), but we will give our best to keep you in the loop of the most important developments in Drakansang's future!

With that said, let me address the elephant in the room:  We have followed the discussions around the re-balancing we did with Release 89 closely and played hundreds of PVP matches ourselves to carefully evaluate the situation. Our two main goals still are PVP balance as well as making the game more fun in general.

We would like you to know that with Release 91 we will introduce a whole set of changes. Many of which address your concerns regarding PvE gameplay and the Dragon Knight specifically. We will also introduce smaller tweaks regarding overall balance, making your choice of talents much more interesting while improving PVP balance at the same time.
Have fun with Release 91 and the re-balancing and let us know how you feel about it. We can't wait to hear from you.

We will continue working and improving upon the balancing and our core gameplay. For example: How would you like to execute skills like "Battle Cry" and "Adrenaline" mid-movement?


Now mind the line I colored red and bold.  Did they really read all those concerns on the English and German forum ?  Or did they already noticed that many dragon knights play a lot less than before ?  We'll never know.  But the most important is that they want to do something about the playability of the dragon knight in PvE.  Let's hope the changes are significant.

Although a little premature, but I have a good feeling about the recent update and the upcoming one.  Let's hope my feelings don't betray me.